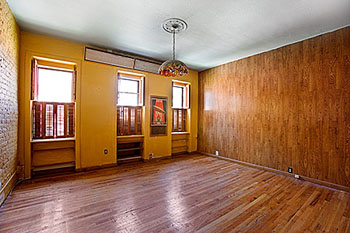 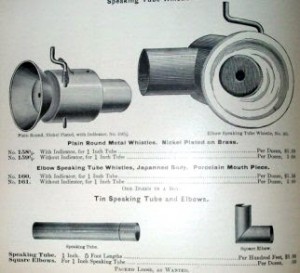 Reprinted from The Brownstoner

(A Publication of Brownstone Revival Coalition)

It is 1885 in a fine New York City townhouse on West 75th Street, or maybe it is in Park Slope or Fort Greene in Brooklyn. No matter – they are all much alike.

The doorbell has just rung.

The cook is out shopping, and it is the maid’s afternoon off, so the lady of this typical brownstone house with its typical two servants responds. She slips the brass disc covering the mouth piece of the speaking tube to one side and speaks into it. “Yes? Who is it?” she asks.

At the service entrance beneath the stoop, a youngster speaks into the flared bronze tube next to the iron gate: “It’s the butcher boy, Ma’am. I have your crown roast.”

Although the intercoms of the last century couldn’t deliver music, they could handle ordinary household business with great effectiveness. There were two major components: bell systems and speaking tubes.

At the outer doors, both below and above the stoop, bells were activated through a knob next to the door that the visitor pulled. A long wire, run through a tube and attached to a tongue that struck the bell, announced the visitor’s presence. There were separate bells for basement and parlor floors.

The interior bell system was more complicated. Wires for separate bell-pulls in different rooms-parlor, dining room, master bedroom, perhaps other bedrooms or a library, ran through the walls to separate bells in the kitchen, these bells, quite small, were suspended from large spirals of coiled springs. A pull on the wire from an upstairs room could start a bell jingling on its spring for a considerable length of time-a minute or two-long enough for a servant, hearing it, to look over, or come in perhaps from the extension where she might have been doing the laundry, to identify the bell and thus the location of the summoner.

The late Joseph Roberto, the architect who, with his wife, supervised the magnificent restoration of the Old Merchant’s House on East Fourth Street, encountered one of his most difficult problems in finding wire coils to restore the kitchen bells authentically.

I suspect that the brownstone speaking tubes operated like those in the pre-electronic Navy, with a whistle and a “Now hear this!” to start the system going. But brownstone speaking tubes, I believe, were of lead and ran through the walls from the outer entrances to the hallways of the parlor and bedroom floors. The “mouth-pieces,” as they were called, still can be seen in many houses, and it is likely that the old lead tubes still snake through thousands of brownstone walls-although because lead deforms so easily they would no longer be of any use.

The flared brass mouth-pieces in my 1886 Brooklyn brownstone still exist, although they no longer work. But sometime back I had the opportunity to visit a brownstone in Prospect Heights that did have an operating speaking-tube system, I was amazed at the quality of sound: slightly muffled but clear, with the voice at the other end easily identifiable and all the words perfectly intelligible.

What amazing houses these New York brownstones are!