48 West 87th Street
(For Sale Exclusively Through Vandenberg)
Today, the Upper West Side is instantly recognizable by its rows of brownstones. Their beauty, ranging from stately to ornate, defines the neighborhood. Yet there was actually a time before our beloved Upper West Side townhouses!
Most examples of the Upper West Side townhouse were not constructed until the 1870s-1930s. Part of the fascination of these homes is in their faithful reflection of the tastes and opinions of a precise historical era. The zeitgeist of the Gilded Age gave these houses the beauty and spirit that we love so much. So we at Vandenberg thought it might be interesting to explore the Upper West Side townhouse boom through the eyes of people who were there.
Most current Upper West Siders wouldn’t have recognized the neighborhood in 1873. Before the building boom began, the Upper West Side was “barren, open land marked with occasional shanties, vegetable gardens, menacing rock outgrowths, lowly taverns, and decrepit eighteenth- and nineteenth-century country mansions,” according to Bricks & Brownstone. This story is confirmed by popular lore, which claims that the Dakota Hotel got its name from the fact that at the time the Upper West Side was considered as wild and uninhabited as the Dakota territory. 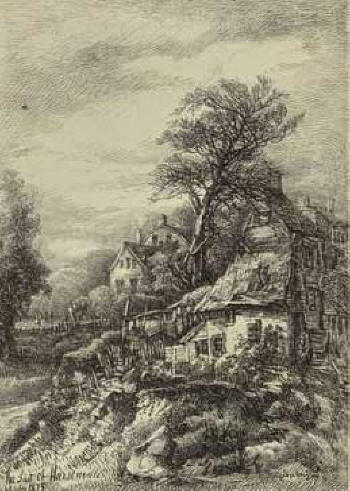 Still Standing in 1893
(Source: Mary Ratcliffe at the West 75th Street Block Association)
Edith Wharton’s classic New York novel, The Age of Innocence, contains several interesting primary-source references to the residential architecture of the period. In the 1860s, none but the most audacious builders ventured into “the inaccessible wilderness near the Central Park.” The architecture-savvy Pulitzer Prize winner also wrote that limestone and other light-colored stones in the ‘sixties were a fashion risk: in Old New York, “brown sandstone seemed as much the only wear as a frock-coat in the afternoon.”
By the 1880s,when the Upper West Side took on the aspect we recognize today, things began to change. The pendulum of architectural opinion swung away from the brown stone Wharton disliked. Public taste turned toward “exciting” and “interesting” new architectural trends. The Queen Anne and Renaissance styles replaced the simple Italianate and Neo-Grec townhouse styles that had been popular twenty years earlier. As a result, many Upper West Side examples of New York City townhouses show a unique eclecticism of decoration and design. Although critic Montgomery Schuyler claimed he was made “sea-sick” by such variety, others immediately loved the neighborhood’s aspect. One Gilded Age critic called Upper West Side townhouses “the most interesting examples of domestic architecture that New York has to show.” According to Charles Lockwood, at the turn of the century one New Yorker wrote that Riverside Drive was “universally acknowledged to be the most beautiful and picturesque [street] in the world.”

As early as the 1890s, the Upper West Side started to show signs of becoming one of the city’s artistic and cultural centers. Columbia University chose this neighborhood of ornate and elegant Manhattan brownstones as the site of its new campus. World-renowned artists and musicians chose to live on the Upper West Side long before the Metropolitan Opera and Lincoln Center figured out that the area was destined to be the center of New York’s musical scene. Enrico Caruso and Arturo Toscanini, for example, were in the West 70s long before the Metropolitan Opera arrived. Perhaps what drew these greats was (at least in part) the picturesque aspect of the neighborhood.

Today, the Upper West Side is one of the most sought-after neighborhoods in Manhattan. Perhaps what sets it apart is the fact that classic townhouses — residences that would draw crowds of admirers in any other city — hardly even turn heads on the Upper West Side. In the blocks around Juilliard, the Met, and Lincoln Center, aesthetic excellence is simply de rigeur. Hence the continued survival and loving preservation of those NY townhouses we adore.
(Source: Charles Lockwood, Bricks & Brownstone; Edith Wharton, The Age of Innocence; West 75th Street Block Association)

For more information on townhouses for sale and New York City Brownstones for Sale , contact Vandenberg — The Townhouse Experts TM. We specialize in townhouse realty.