The Talk of the Town: Country Living in the Big City

The Talk of the Town: Country Living in the Big City

Rick Nelson got his first inkling of what it means to own a townhouse in New York City through the simple act of calling for a pizza delivery.

When Nelson gave his Upper West Side street address, the order taker reflexively asked: “Apartment number?” After a moment of confusion, Nelson assured him that the delivery person could simply knock on the front door. “I thought, This is really different,” he recalls.

Different is a word you hear a lot from townhouse owners to describe the unique way they experience life in a city legendary for skyscrapers.

For Alyssa Au, a main attraction of the Upper East Side townhouse she shares with her husband and three young children is the backyard, where kids can be kids. “It’s not like they’re going to a playground where I have to watch them,” she says. “They go outside, get their fresh air and sunlight, have a water balloon fight, and they’re happy.” Au adds, “Outdoor space in Manhattan is priceless.” 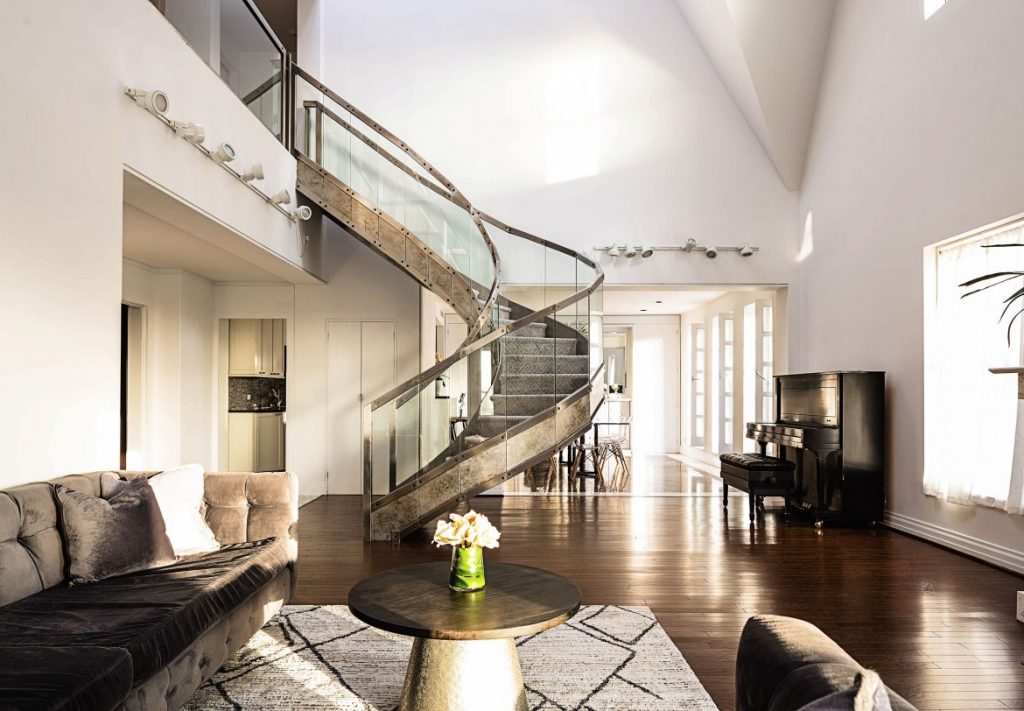 There’s an almost mystical component to townhouse living, says Dexter Guerrieri, a townhouse owner and the founder, with his wife, Jane van den Berg Ordway, of Vandenberg, The Townhouse Experts®, which joined Douglas Elliman in 2018. It’s a deep connection to the earth that comes when owners “access their property with their own two feet rather than an elevator,” he says. 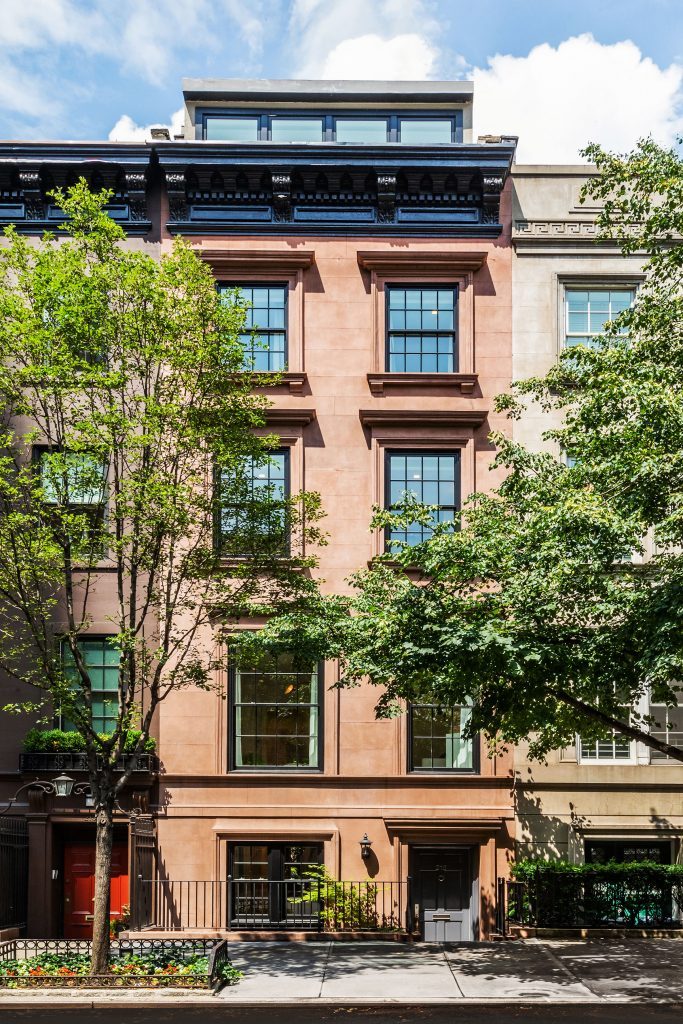 Part of the appeal is scarcity. In 2017, 250 townhouses were sold in Manhattan, compared with nearly 12,000 co-ops and condominiums, according to studies by Douglas Elliman. Yet within that relatively small pool lies a surprising diversity of neighborhoods, styles, and prices, says Douglas Elliman townhouse specialist George Vanderploeg. Many properties date from the Gilded Age building spree of the late 19th century.

Depending on size and width, location, condition, and other factors, prices in Manhattan’s Upper East or West Side range from about $5 million to as high as $50 million, Vanderploeg says. Even at those prices, when you factor in multiple levels of living space, plus a backyard with a garden, terraces, and a roof deck, townhouses may offer more space per dollar than comparable high-end condos or co-ops, he adds. And buyers who look a bit farther afield, to Harlem or Brooklyn, may find pristine townhouses starting at $3 million to $4 million, Guerrieri notes.

The Lure of Independence 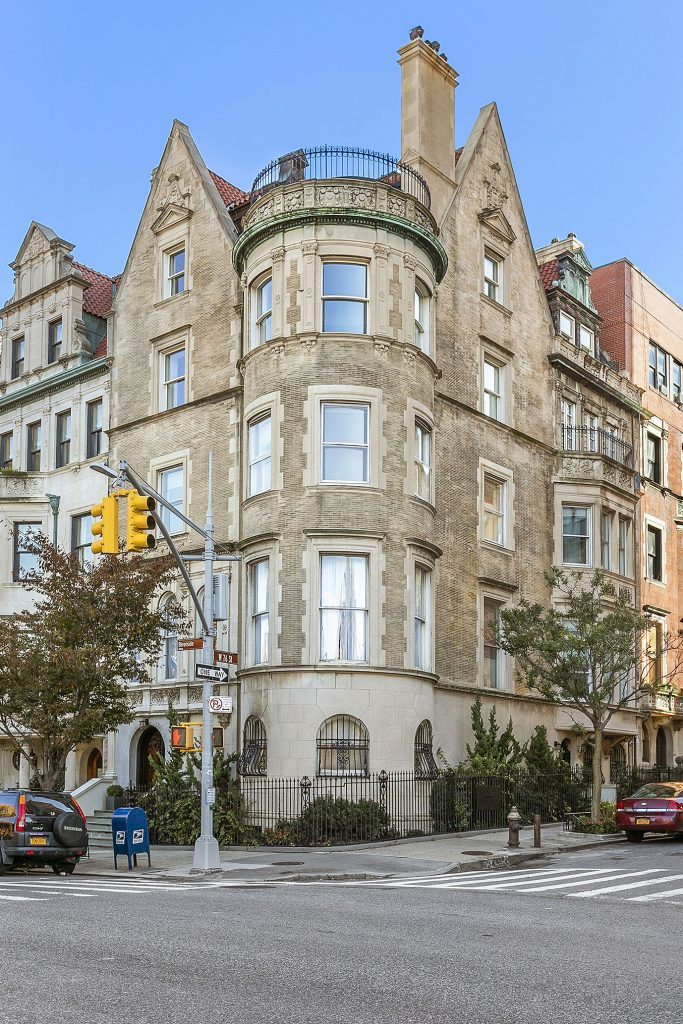 Another key attraction is the ability to customize your home without a co-op board to weigh in on your plans. “It is very rare to have someone buy a house just to leave it like it is,” says Guerrieri.“There is something about the personality profile of townhouse buyers; they just can’t resist customizing.”

For example, the ground floor of Alyssa Au’s townhouse originally featured a kitchen and dining room but no place to relax. Building a sunroom required going through the dining room wall into part of the yard. “Aside from city approval, which everybody has to get, we didn’t have to get it approved by anyone else,” says Au.

Likewise, townhouse owners looking to offset their mortgage have the freedom to rent out a portion of their home. And when the time comes to sell, you don’t have to make sure a board likes your buyer. Such independence “is a big, big reason why people buy houses,” Vanderploeg says. “In fact, I would say that’s the biggest reason.” 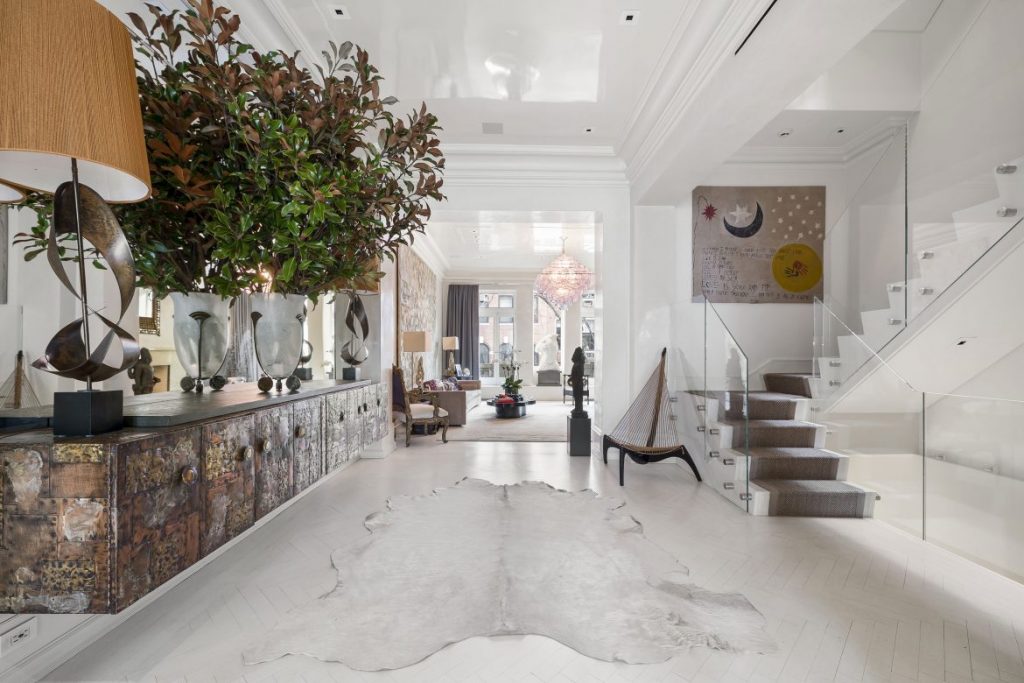 In some cases, returning a townhouse to its original glory requires full-scale gutting—and for some owners, that’s part of the fun. The vacant 1890s brownstone that Rick and Jenny Nelson purchased in 2003 had for more than half a century housed up to eight apartments. Re-creating a single-family home required patience, imagination, and even some historical sleuthing. “We went to look at a lot of brownstones to see what used to be in these places,” Jenny Nelson recalls.

Discarded wainscoting found in the basement helped restore the dining room’s original appearance. A mantel in the rear of the house still had its delivery date on the back: “11-7-92,” as in 1892. Relieved of layers of old paint, the seemingly drab piece turned out to be a gem; it now adorns the front parlor. An artisan from Italy, meanwhile, helped restore the home’s Romanesque exterior by recarving the staircase balustrades.

New plumbing, electricity, and structural beams helped bring the house up to code. And modern additions such as a home theater, gym, and rooftop deck completed a dream of townhouse living that the Nelsons, high school sweethearts from Baltimore, had harbored since moving to New York in the 1980s. 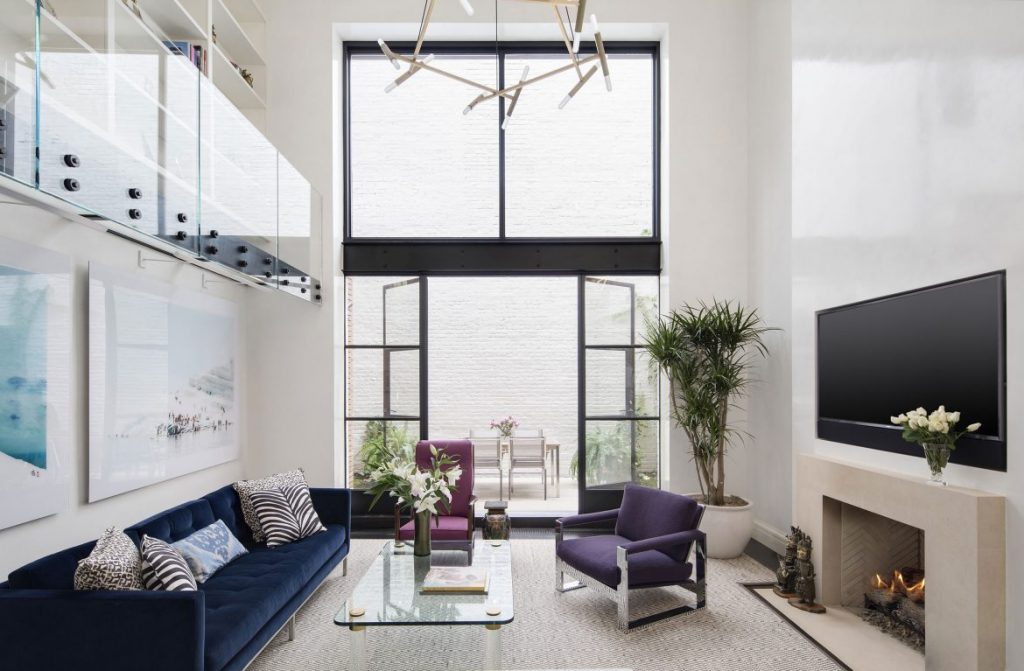 Of course, with independence comes greater responsibility for issues that in a high-rise would be handled by a doorman, the super, or maintenance staff. Everything from fixing a leaky ceiling to accepting package deliveries to taking trash cans to the sidewalk are the owner’s responsibility. Some owners gladly take on those duties, while others contract with freelance agencies to handle such tasks on a regular basis.

In return, townhouse dwellers say they develop a sense of community with their neighbors that most people associate with small towns. And paradoxically, townhouses offer the ability to escape—from the city at large, and even within the confines of the house. For the Nelsons, that was a crucial consideration as the couple’s three children grew older and wanted to entertain friends. Says Rick, “Being able to spread things out over six floors affords a lot of privacy.” 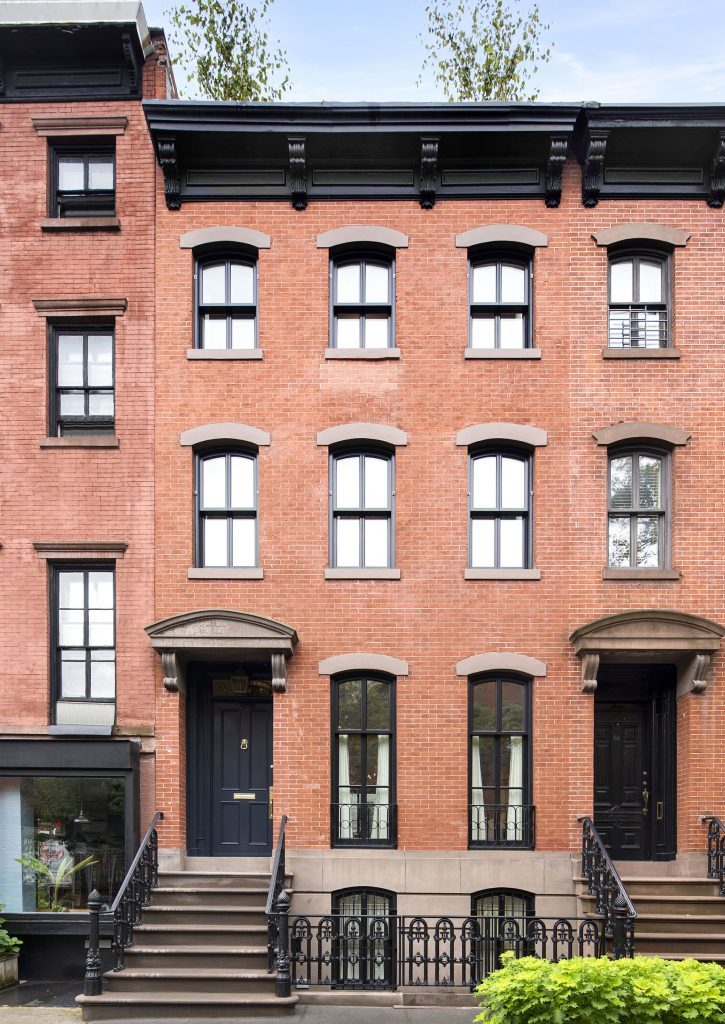 And sometimes it’s the seemingly little things that make the biggest difference. Say, for example, it’s January. Snow. Ice. Sunday morning. “There are times when you don’t want to walk your dog,” Guerrieri says. “But your dog has to go. You put him out in the backyard.” 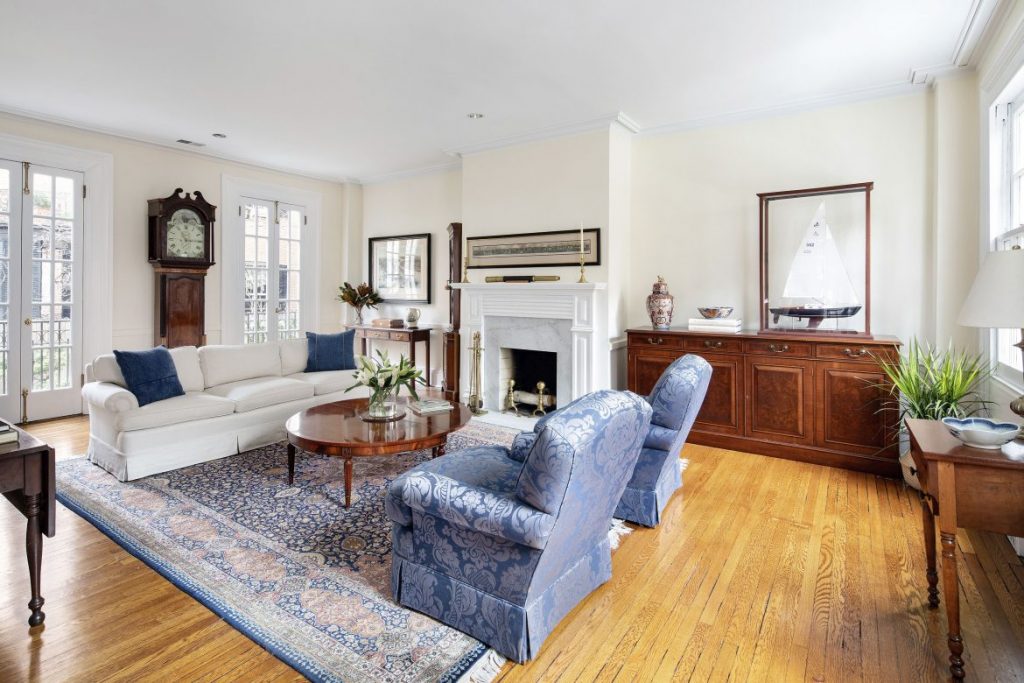 According to New York City property tax laws, residences with one to three families (including most townhouses) are taxed at a “Class 1” rate, while co-ops and condominiums in buildings with more than three units are taxed at a higher “Class 2” rate. The law also limits increases on assessments for Class 1 properties to no more than 6% in a single year, and no more than 20% over five years, meaning that assessed rates for townhouses often stay far below the property’s market value, says George Vanderploeg, of Douglas Elliman.

While luxury home buyers are unlikely to make a decision based solely on taxes, that benefit adds one more reason to consider a townhouse, says Vanderploeg. That’s especially true since the federal tax law passed in late 2017 limited mortgage deductions, making luxury living in New York and elsewhere more expensive.