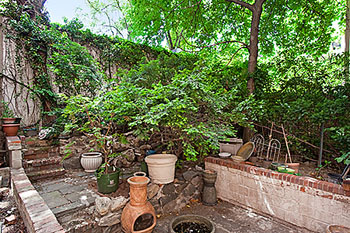 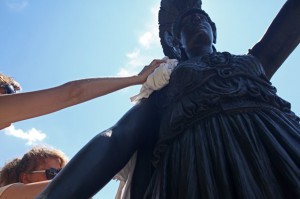 On July 27, 2010 the Preservation Volunteers were featured in a story on NY1! A news crew taped them at the Green-Wood Cemetery as they scrubbed, washed and polished the statue of Minerva, the Goddess of War. Click here to view the NY! story and watch the video clip!
They were also featured on the WNYC blog! Read the article below! 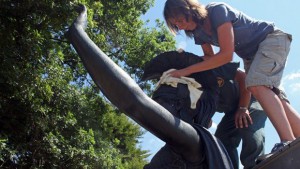 Perched at Brooklyn’s highest natural point (200 ft. above sea level) inGreen-Wood cemetery, the Roman Goddess Minerva received a fresh waxing Tuesday morning, courtesy of a few French volunteers (and one American).
“I know that when I’m back in France I’ll tell everybody that I know that there’s this great cemetary and this great statue,” said Ines Reulet, 21 from France, one of six volunteers in New York for the next two weeks with the Preservation Volunteers of America program.
Reulet says she wanted to discover something other than France’s castles this summer. She and the other volunteers spent the morning applying fresh coats of wax to Minerva and will be tidying up some granite tombstones for the rest of the afternoon.
Richard Moylan, president of Green-Wood Cemetery, says the statue was placed there by the local businessman Charles Higgins in 1920 to commemorate the Battle of Brooklyn. “She is saluting the Statue of Liberty. And that’s especially important with our French volunteers, since the statue was a gift from France and France helped us with the Revolutionary War,” Moylan says. “And Liberty is actually, we think, looking right at us, so Minerva is saluting her.”
Minerva sits near the grave sites of Charles Ebbets, of Brooklyn Dodger fame, and the composer Leonard Bernstein.

From one-room schoolhouses in Colorado mining towns to 12th century churches in the heart of France, Preservation Volunteers provides volunteers to work with that community’s own volunteers, contractors and craftsmen in a partnered effort of restoration. In addition, through an agreement with REMPART, French volunteers often work on American projects while Americans travel to France. Even language barriers fall to the wayside as people come together, focusing one heart and mind on breathing new life into structures that represent our walk through time.

The projects offers a significant technical and cultural experience for both hosts and volunteers.