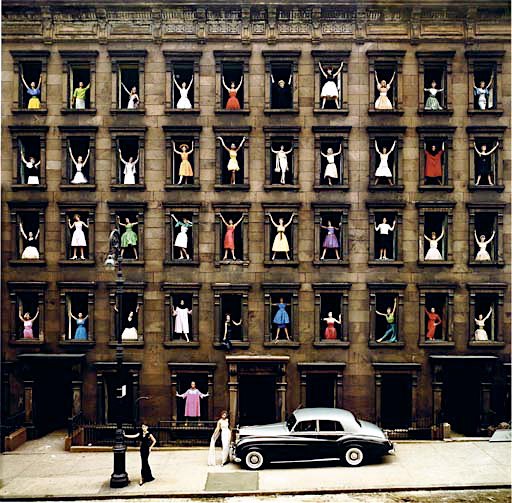 October 19, 2012GeneralListing Admin
Is any architectural form as evocative as the New York City townhouse?
Even at the nadir of the townhouse’s popularity (1960 to be exact) artists’ eyes were drawn to the well-recognized lintels and sills of NYC’s classic rowhouses.  This natural attraction often produced stunning results, as in this photograph that sold for $30,000 at a Christie’s auction:
For a zoomable image, visit the Christie’s auction site here.
I love the story behind this photograph: one day, Ormond Gigli (well-known celebrity photographer for Time, Paris Match, Life, and The Saturday Evening Post) looked out the window at three crumbling brownstones across the street from his studio on East 58th Street.  The entire row was slated for demolition, a common practice during the heyday of “urban renewal.”  As Gigli says on his website:
I was inspired to somehow immortalize those buildings. I had the vision of 43 women in formal dress adorning the windows of the skeletal facade.
…
The day before the buildings were razed, the 43 women appeared in their finest attire, went into the buildings, climbed the old stairs, and took their places in the windows. I was set up on my fire escape across the street, directing the scene, with bullhorn in hand.
–                                                — www.OrmondGigli.com
The resulting work is considered Gigli’s masterpiece, and is an eloquent tribute to these iconic Manhattan brownstones.
I met Ormond’s wife, Sue Ellen Gigli, in 2006 when she was considering selling their 58thStreet townhouse.  I introduced her to Josh Barbanel, then-writer of the Times’s “Big Deal” column.  Josh loved the story of this photo, and penned an article on Ormond’s townhouse and career.
Thank you, Ormond, for creating an immortal tribute to the Manhattan townhouse.
: brownstone history, Dexter Guerrieri, Vandenberg