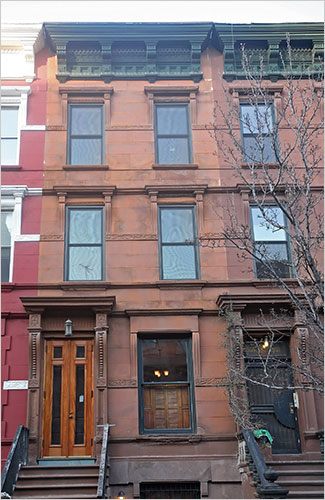 “An Academic Perk “
By JOSH BARBANEL
Published: March 20, 2009 , New York Times
MANY buyers say that jumbo mortgages are hard to come by these days. But don’t tell that to Edward R. Morrison, a law professor and economist at Columbia University, who is something of an expert on these troubled times.

Last month Mr. Morrison and his wife, Anne, bought a restored two-family town house at 357 West 121 Street in Harlem for $2.575 million. Brokers said it was a record price for a town house in the neighborhood — just down the hill from the Columbia campus in Morningside Heights, near Morningside Park — and one of the top 10 town house sales in Harlem in recent years.

Though the market downturn has caused the number of condo and town house sales to drop sharply in Harlem, brokers say there have been a small stream of town house sales at significant but reduced prices. In February, for instanace, Brian Phillips, a broker at Prudential Douglas Elliman, sold a town house on West 143rd Street near Convent Avenue for $1.7 million. The seller had turned down an offer of $1.85 million from the same buyer three months earlier.

The two-family town house bought by the Morrisons was restored over a decade by the prior owner, Peter Marciano, a contractor, who stripped many layers of paint from the woodwork and created a rooftop garden. Mr. Marciano paid $150,000 for the house in 1997, just as new buyers were rediscovering Harlem, and brokers said that after all that hands-on work, he had a hard time deciding to sell it, repeatedly changing his mind.

Meanwhile the Morrisons, with three children and a dog, were outgrowing their apartment in university-owned housing on Morningside Drive and 115th Street. Mr. Morrison, an expert on bankruptcy court and credit markets, recently testified before the House of Representatives on proposed mortgage foreclosure legislation.

After Mr. Morrison received tenure in 2007, the family looked at many houses near Morningside Park, brokers said. Dexter Guerrieri, the founder of Vandenberg Inc., showed them Mr. Marciano’s house at that time: the asking price was $3.1 million. Then it was pulled from the market.

Last June, it was listed again with Sean Oakes of Halstead Property, with an asking price of $3.265 million. As the economy deteriorated in September, the price dropped just under $3 million; in December it was lowered to $2.65 million. The Morrisons and Mr. Marciano signed a contract in January and closed at the end of February.

Property records show that the Morrisons had some help financing the purchase. They obtained a $1 million first mortgage from Countrywide Bank, now a subsidiary of Bank of America, and a second mortgage directly from Columbia University for $1,039,000.

Elizabeth Schmalz, a spokeswoman for the law school, said the Columbia mortgage was provided by the law school as “one-time compensation assistance” to help Mr. Morrison complete the sale. The first mortgage was provided by Countrywide through another university program that provides mortgages at “favorable rates” to some faculty members. That program also provides a one-time $40,000 payment and an additional $40,000 a year in housing assistance.

“The greatest challenge to recruiting and retaining faculty in New York is housing,” Ms. Schmalz said.

Mr. Morrison is a practitioner of empirical legal studies, analyzing the impact of the law on people and institutions. In 2007, another Columbia law professor specializing in empirical techniques, Catherine M. Sharkey, was recruited by the law school of New York University, whose foundation provided $4.2 million toward the purchase of an apartment for her use on Central Park West and West 106th.

Ms. Schmalz confirmed that Mr. Morrison had been offered a position in July at the law school of the University of Chicago. But she said that he had worked out the terms of his housing assistance from Columbia long before then.

The New York Times: Honoring the legacy of Everett Ortner