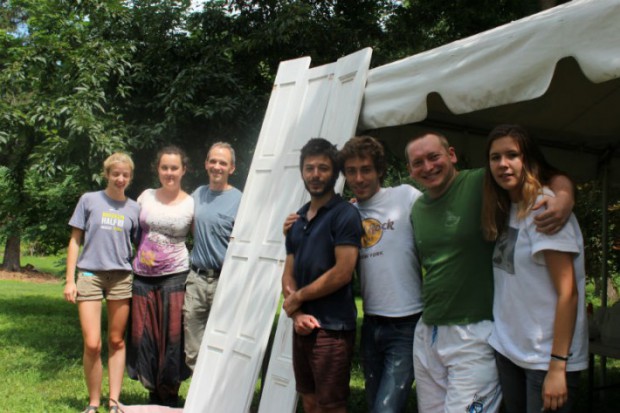 Every summer since, PV has brought French volunteers to the U.S.  The volunteers cooperate with U.S.-based preservationists to help preserve our historic buildings and monuments.

This year’s projects at Bartow-Pell Mansion Museum and Green-Wood Cemetery were covered in a terrific article in France-Amerique magazine.

From the article (in English):

Everett Ortner, a francophile conservationist, now deceased, founded [Preservation Volunteers] with Dexter Guerrieri, its current president.  After a trip and an encounter with the members of Rempart, who rehabilitate the country’s historic monuments on a volunteer basis, these two men decided to create Preservation Volunteers on the model of Rempart.

“For Everett Ortner, there was no equivalent [to Rempart] in the United States – it was sorely lacking…Hence we started welcoming French volunteers, to do the same as they were doing in Europe.  We often have American volunteers, but bringing French volunteers over has remained a tradition.  It’s a means of cross-cultural exchange,” explained [the volunteer director.]

Read the rest of the article (in French) here.

: Dexter Guerrieri, In the News, Vandenberg