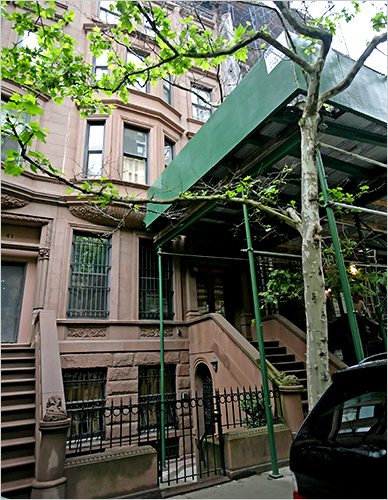 THE backlog of expensive Manhattan apartments and houses has begun to shrink, brokers say, after a spurt of contract signings. The list is now shorter, for example, by a six-bedroom duplex penthouse at 279 Central Park West that went into contract last week for $13.9 million, a 43 percent cut from the original asking price two years ago; and a 5,000-square-foot penthouse loft at 500 Greenwich Street that went into contract a few days earlier for $6.995 million, after a 9 percent cut and 11 months on the market.

But one significant sale, ranking in the top 10 of closed sales so far this year, was never listed at all. It wasn’t even one of those secret listings that are whispered about by brokers but never included in broker listing systems or advertised in the newspapers o r on the Web.

The first word that a 20-foot-wide brownstone at 39 West 70th Street off Central Park West was on the market was when the deed was filed with the city on May 13 showing that the house had sold for $15 million. It listed the buyer as Bob Weinstein, who with his brother, Harvey, founded Miramax Films, and later the Weinstein Company, which is said to be juggling a heavy debt load of late.

Mr. Weinstein lives in a duplex apartment at the Beresford at 211 Central Park West at 81st Street, which he bought for $20 million in 2000. But even back then, he really wanted something else.

“I grew up with a stoop in Queens,” he said in an interview. “I have always wanted a town house.”

Over the winter, word began to circulate that a major buyer was looking for a town house in move-in condition near the park, a buyer who was ready and able to pay in cash.

Dexter Guerrieri, a broker and founder of Vandenberg, a small West Side brokerage, sprang into action. Rather than compete with huge companies like the Corcoran Group or Prudential Douglas Elliman, Mr. Guerrieri’s firm does only one thing: buy and sell town houses.

Accordingly, Mr. Guerrieri makes it his business to know everything he can about the 2,000 town houses, including rental buildings, on the West Side.

“I talk to people periodically and a lot of owners say, ‘You find me a buyer at $15 million, and I will sell m y house,’ ” he said. “There are these so-called quiet listings. This wasn’t even that.”

Richard Grosbard, a dealer in the diamond district, was willing to listen. Mr. Grosbard and his wife, Ronnie, had a town house that they bought for about $4 million in 2000. They stripped the house down to the bricks, and rebuilt and restored it.

Mr. Weinstein said he had no immediate plans to sell the Beresford apartment. Then again, he said, he might sell it now — for the right price. A few buyers have come by for a look. It is what you might call a quiet listing.

Are you interested in buying a New York Brownstone? For more information on NY townhouses and New York City Brownstones for sale , contact Vandenberg — The Townhouse Experts TM. We specialize in townhouse realty.