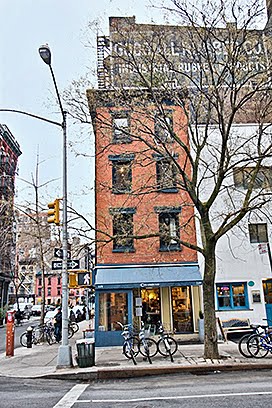 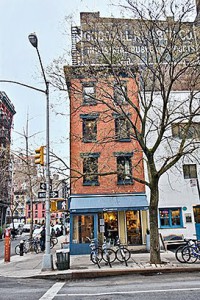 1 White Street
$3,250,000
One White Street represents a unique opportunity to own a piece of New York City mythology and Beatles lore. This four-story Tribeca townhouse, built in 1808, has enjoyed several incarnations – it has been everything from the headquarters of a rubber concern to the home of the Guerilla Art Action Group. Perhaps its most famous (if briefest) incarnation was as the Nutopian Embassy. In an attempt to avoid deportation in 1973, John Lennon and Yoko Ono applied to the UN for “diplomatic immunity” as ambassadors of the “conceptual country” of Nutopia. They called a press conference on April Fools’ Day to announce the creation of Nutopia and specified that the Embassy was located at One White Street. The Nutopian declaration was also included in the liner notes of Lennon’s Mind Games album. The current owners still receive letters of sympathy intended for Yoko Ono, and the house is occasionally photographed by John Lennon fans. 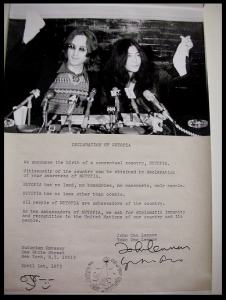 Since its last purchase, the building has been gradually renovated into an owner’s triplex with rental income from a soup and sandwich restaurant on the ground floor. The owners have designed an interior in keeping with the artistically eclectic ethos of the property. The numerous casement windows on the 43-foot-long White Street facade are ingeniously utilized to create wide, light-drenched spaces. Cheerful colors and varied rough-hewn materials, along with a wood-burning fireplace and rustic original pine floors, manage to convince you that you have escaped from a Manhattan townhouse to a Northern Californian bungalow. The roof garden only partially breaks this illusion. With potted evergreens and rosebushes at your feet, you are almost surprised by the vista of vibrant and bustling Tribeca, one of the trendiest and most exclusive neighborhoods in lower Manhattan. Create a single-family townhouse or live in triplex plus terrific rental income. 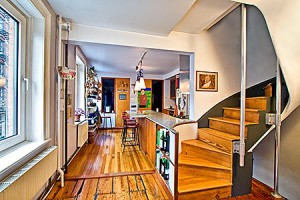 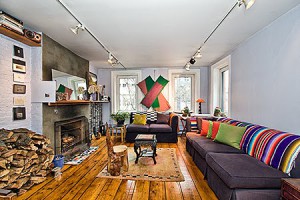 Click here for more pictures of this Manhattan Townhouse.