I thought I’d start a series on the history of Townhouses in New York City. I’ll try to keep it short, but there is certainly much to say! Enjoy. 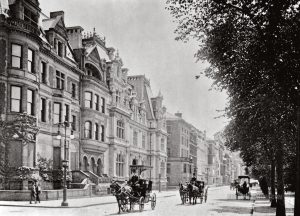 120 years ago, architects and early ‘developers’ began building New York City Townhouses as we know them today. These single-family homes were built using bricks and stone because wood structures were susceptible to fires, which could wipe out whole blocks.  The ornate details that still remain in some of these homes today were created inexpensively using “modern” mass production tools.  Before these production tools were invented, these details had required custom handcrafting which was more expensive. These “row houses” were built in sets of 4, 6 or 8.   A doorway on the third floor was kept open for passing materials between the buildings.  Evidence of these bricked-over doors can be seen if you remove the plaster wall covering.

During the 100 years after their initial construction, Townhouses went through major transformations.  I would speculate that the most significant impacts on the reconfiguration of townhouses were the Great Depression in the 1930s and ‘Urban Renewal’ in the 1960s.  In order to hold onto their buildings, owners fighting off bankruptcy were forced to divide their townhouses into multiple units, to provide rental income.  Aside from buildings being divided up for rental income, many townhouse owners made separate units within the buildings to accommodate multiple family members or extended family. The changes resulted in what we now call a Multi-Family Townhouse.

A doorway on the third floor was kept open for passing materials between the buildings.

Hey! A doorway on the third floor was kept open for passing materials between the buildings.